Every year, the country's largest ski history research organization, the Utah Ski Archives, awards honors to movers and shakers in the ski industry.

This year, the History Maker award goes to the Wasatch Mountain Club for offering outdoor recreation for 100 years. It was founded with just 13 enthusiasts who enjoyed hiking, ski touring and snowshoeing. A few years later it played a key role in the growth of skiing by offering "ski trains."

Today it has about 1,000 members, and outdoor activities have changed with the times. The club's non-competitive, muscle-powered offerings now include river running, mountain biking, back packing and more. It also focuses on conservation and education.

The prestigious S. J. Quinney award goes to Alta's iconic Alan Engen for his life-long influence on skiing. Son of the famed Alf Engen, Alan learned to ski when he was about 2 years old and shortly thereafter he learned how to ski deep snow by following his father in Alta's famed powder. He went on to be an award winning national and international ski champion, and his dedication to the sport continues to evolve today. 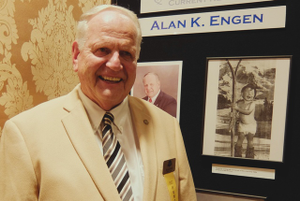 Diapers and skis! Alan Engen now and about 2 years old wearing a diaper and ski boots with his first pair of skis / photo: Harriet Wallis

He became the Director of Skiing at Alta, he's in the U.S. Ski & Snowboard Hall of Fame, he's a ski historian, and he's authored several in-depth books about skiing, Then he went on to found the Alf Engen Ski Museum in Park City, Utah, as a showcase for the multitude of trophies his father earned throughout his life as a ski champion.

But its more than that. The museum grew into an interactive adventure that's both educational and fun. Guests get to push a button that starts and avalanche, take a simulated chairlift ride, and try their luck as an animated

About the Utah Ski Archives

The Archives collection currently contains 500,000 images, 250 manuscripts and 6,000 audio, video and films. The collection is open to the public and is located in the University of Utah campus library in Salt Lake City. Every year, it holds a gala fundraiser to help support its mission of preserving ski history. And the gala honors individuals and organizations that are a major influence on ski industry. Daughters of the American Revolution (DAR)